Could you be motivated by caffeine addiction and not even know it? More than half of all coffee consumers would rather skip a shower in the morning, than skip their coffee. 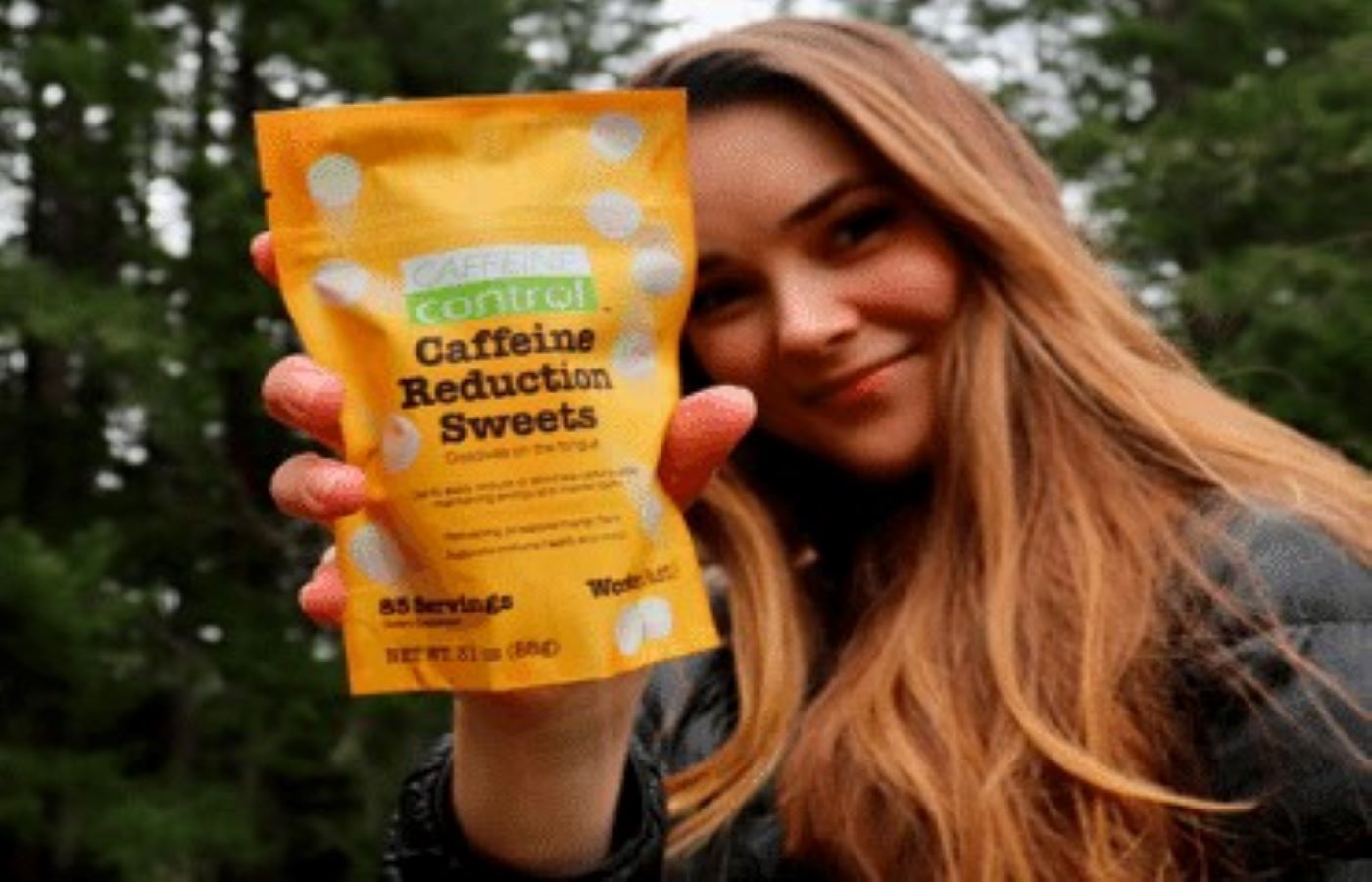 Could you be motivated by caffeine addiction and not even know it? More than half of all coffee consumers would rather skip a shower in the morning, than skip their coffee. About 49% of them would rather do without their mobile phone for a whole month than give up coffee. New research confirms we don’t “like” coffee, as much as we “need” coffee. Many of us are consuming caffeine not for the boost it gives us, but to avoid the nasty effects of caffeine withdrawal and to just feel “normal”.

Caffeine withdrawal symptoms can begin in as little as 12 hours after your last dose of caffeine and those symptoms can be bad: headaches, mood swings, even flu like symptoms that can last 2 weeks or more.

Now there is an alternative to going “cold turkey” or switching to decaf coffee. That alternative is a sweet, pineapple/mango flavored tablet that melts on the tongue. The tablet contains a small dose of caffeine (the equivalent of a few sips of coffee) along with Vitamin C, Zinc, L-Theanine, B6 and B12, that will quickly disrupt caffeine withdrawal symptoms while supporting immune health, mood and energy needs. CAFFEINEcontrol is the first and only product to address caffeine reduction based on a low-caffeine formula and it does it faster than any other caffeine reduction solution.

While the caffeine in coffee must first be digested before making its way to the brain, CAFFEINEcontrol hacks the process by delivering micro-doses of caffeine absorbed through the oral mucosa (mouth) allowing caffeine to go straight to the brain. While drinking coffee will take up to an hour to take full effect, making it easy to overconsume caffeine and leading to addiction, CAFFEINEcontrol’s quick results mean you only consume the caffeine you need.

Why quit caffeine? For some people, the benefits of reducing or eliminating caffeine will be an improvement in health and wellbeing, like lowering blood pressure or sleeping better. But, for others, the biggest benefit to quitting caffeine may be that CAFFEINE WILL WORK AGAIN. When you beat your caffeine addiction and moderately use caffeine again, it will work like it used to; giving you a significant boost when you need it. Beating caffeine addiction gives the control to choose when you want caffeine, instead of being chained to your addiction, and letting withdrawal symptoms dictate when you NEED caffeine to not feel bad.

negative impact of too much caffeine:
• Increase anxiety and nervousness
• Increase heart rate
• Disrupt sleep & cause insomnia
• Disturb mood
• Cause dizziness
• Increase frequency and severity of headaches
• Cause muscle tremors
• Cause nausea & digestive upset
• Addiction triggers severe headaches and/or flu-like symptoms when caffeine is eliminated
• Can be dangerous when consumed with alcohol

How much caffeine do you really need? How much will leave you addicted? Caffeine is metabolized by the liver and how much you really need or can even absorb will be impacted by individual factors like age, weight or metabolism. Extra caffeine will mostly wash away in a quick trip to the bathroom, but your body will also hold back excess caffeine in your tissue where it can disrupt sleep and make you feel jittery, nervous or edgy. Caffeine’s biggest lie is it does not give you “energy”. Caffeine is a stimulant that hypes you up; a lot like fear and our “flight or fight” response. Any time you use more than you can metabolize you are training your body to become addicted to the overstimulation.

How much caffeine is safe? The U.S. Food and Drug Administration (FDA) has set 400mg as a safe limit for daily caffeine consumption. That equals about 3 shots of espresso or 4 cups of drip coffee or 4.5 typical energy drinks or 19 CAFFEINEcontrol tablets. CAFFEINEcontrol’s microdose of caffeine and quick absorption makes you feel great on less caffeine so you never miss the extra caffeine.

Each pouch contains 85 servings and is sold online at CAFFEINEcontrol.com for $24.99 (with free shipping). That’s only 29 cents per serving (compared to the average cost of a cup of coffee which is now $2.99.
Used as a caffeine Replacement, CAFFEINEcontrol Has the potential to save consumers hundreds of dollars
with every pouch.

CAFFEINEcontrol Features & Benefits
• Reduce or Eliminate Caffeine by interrupting withdrawal symptoms with a micro dose of caffeine
• Immune System Support (Vitamin C & Zinc)
• Improve Mood (L-Theanine)
• Sleep Better (As a benefit of reduced caffeine intake)
• Can be used as a caffeine replacement, even if your goal is not to completely eliminate caffeine&

Caffeine Control was developed based on Deb’s personal quest to reduce caffeine in a simple and convenient way that allowed the user to set the terms of how much caffeine they wanted to consume and when. CAFFEINEcontrol is a unique solution to quiting the last socially acceptable addiction.

Quotes:
“Anxiety, exhaustion and a twitch under my left eye that lasted for 3 weeks had me questioning if my entire life was off track” said Deb Willford, owner of CAFFEINEcontrol. “Until I realized a dysfunctional relationship with caffeine was the only problem I had. I’d let my desire to get things done unknowingly fuel an addiction to caffeine that was making me miserable.”

“The biggest lie we believe about our morning coffee is it gives us energy” said Deb Willford, owner of CAFFEINEcontrol. “When you are addicted to caffeine it means you don’t get the stimulation you expect from coffee. Instead of fueling our ambitions, most of us are just feeding our caffeine addictions and avoiding caffeine withdrawal headaches.”

“The only thing worse than being addicted to caffeine is the withdrawal symptoms when you try to quit caffeine” said Deb Willford, owner of CAFFEINEcontrol. “Caffeine addiction makes you tired, jumpy, anxious and easily irritated. But caffeine withdrawal can trigger flu-like symptoms that are so bad that most people that try to quit will fail and just accept being addicted.”

“Caffeine is the last socially acceptable addiction” said Deb Willford, owner of CAFFEINEcontrol. “The irony is that caffeine addiction robs you of the benefits you consume caffeine to get. Instead of providing a boost to start the day, most of us are just feeding our bodies addiction to caffeine and making the caffeine withdrawal symptoms go away for a few hours. In order to make caffeine work for you again, you have to quit being addicted.”

“Caffeine was the best and longest relationship of my life. Caffeine was a perfect relationship, always supporting whatever goal I set for myself; until my perfect relationship turned into a nightmare. In the past I’d had doctors tell me I was showing signs of too much caffeine: occasional anxiety, sleeplessness and even caffeine related fibroadenoma. The discomfort of being addicted seemed minor compared to the benefits: I was a star performer. I got stuff done. I grew up with the coffee culture in Seattle so quitting caffeine was never on my radar. At the height of my caffeine addiction I was consuming between 900-1200mg of caffeine a day; that’s up to 3x the FDA recommended maximum. I was having trouble sleeping every night along with anxiety, muscle twitches, irrritabilty and mood swings that made me question if my entire life was off track. But, the caffeine addiction I had so consistently built over many years was not going to just let me just waltz away because I’d changed my mind. And there were no products out there to help me easily scale back my caffeine addiction on my own terms.”

To create CAFFEINEcontrol we partnered with a company that has a long and prestigious history of producing caffeine related products, going back to being the company that developed a caffeine gum formula for the U.S. Army. All development and production was undertaken here in the U.S.A. under strict FDA standards, ensuring freshness and purity of the product, as well as supporting our local economies. Care was also taken to partner with local businesses to ensure we support other small business endeavors whenever possible.